After 16 years in practice, I started an exploration into why low back pain is endemic and concluded the following... contrary to what I have read, experienced, and been told, I have not found low back pain to be directly associated with; lack of exercise, nutritional deficiency, a pronated foot, a short leg syndrome, the piriformis syndrome, SI joint laxity, lordosis, kyphosis or scoliosis.

A typical case of back pain could be a 28 year old patient presenting idiopathic short leg, indicating the need for a shoe lift and specific exercises. Historically this patient may have had no back pain.

Allow me to take you down this path:

Why then, one may ask, would the brain not modulate and self correct all structural issues?

Firstly, such issues are not of a structural nature per se, but influence structure! Structure (referring to the skeleton) is essentially a static medium, while the supportive tissues are effectively the issues of consideration. Neuroscientist, Dr Candace Pert, broke the cardinal law of science by introducing the “emotional” component. Current research suggests that physiology is modulated by our emotional being. Tolerances in the human body are factored for an individual’s makeup. The body will modulate function in order to maintain homeostasis.

Looking beyond the symptoms

NIS is a system to discern and ‘treat’ according to the individual’s tolerances. The ‘holographic’ understanding of the brain interprets glands and muscles as being inextricably linked. The use of muscle reference through holographic understanding correlates 100% with glandular function. Diagnostic laboratory analysis validates this specificity.

This contrasts with the assumption that a particular spinal nerve reference is specific to certain viscera. Anatomically this area is too vague to be precise. Constipation as an example (relating to low back pain) impedes function of the large bowel. The holographic brain relates hamstring and large intestine as being synonymous. Effectively, the hamstring potential will weaken, commensurate with the symptoms of constipation. This weakness will cause an anterior tilting of the pelvis.

Our current paradigm, would logically have us manipulate the ‘appropriate’ nerve reference to the bowel and realign the pelvis. This may seem a reasonable approach, but NOT as the brain sees it. 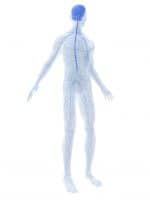 Credence must be given to the brain to determine why a series of intolerances has allowed a symptom like constipation to occur. Again, contrary to belief this is not a fibre problem! NIS determines what has broken down in the brain-bowel connection. This will confirm if the bowel is a primary issue, and if not, what part of the GI tract is incongruent with specific cortical or cerebellar understanding?

When this understanding is reinstated, the real issue is automatically addressed. The spine serves as a neurological collection centre’ while the brain is the ‘detection centre’ electing to connect!