Is this equation a riddle, a nightmare or irritable bowel syndrome?! Not a day goes by without some patient commenting on or expressing some statistic relating to their sleeping patterns.

A good night’s rest is dependent on the availability of three major ingredients:

A simple example of how sleep patterns revolve around blood sugar can be demonstrated when wine is consumed in excess. The up-regulation of insulin very rapidly reduces the active glycogen component, which in turn limits delta sleep patterning. The net result is a night of broken and un-refreshing sleep. 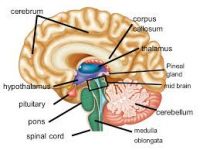 Seemingly quite unrelated to insomnia, is the function of the thalamus gland. This gland is a precursor to any action initiated by the hypothalamus. Without the thalamus being proactive, the glandular orchestra will have difficulty in being able to up-regulate or down-regulate chemistry according to our body’s needs.

An example of this is the control of ADH, the hormone that is produced when the body is overheated.

ACTION:
Thalamus to hypothalamus (CRH) to posterior pituitary. Similarly, in light of insomnia – the insight of the thalamus ensures blood sugar recovery is enabled after a long and busy day.

ACTION:
Thalamus to somatostatin to glucagon to glycogen released from liver. Glucagon stimulates an increase in blood concentration of glucose. The brain in particular has an absolute dependence on glucose as a fuel, because neurons cannot utilise alternative energy sources like fatty acids to any significant extent.

When blood levels of glucose begin to fall below the normal range, additional glucose is necessary.

Many studies have shown that depletion of serotonin levels results in insomnia, as it is necessary for the onset of sleep. Serotonin is metabolized to the hormone melatonin, which is known to help regulate the sleep cycle. Any increase in serotonin levels will increase melatonin levels. Omega 3 supplementation is very helpful.

A broken sleep cycle to void urine means an upset to the digestive and recuperative powers of the body to be effective. Any issue that is affecting the digestive cycle while sleeping will influence serotonin. How would that be? Enterochromaffin cells in the gastrointestinal tract are sites of synthesis and storage of serotonin and are dependent on the integrity of the G I tract function.

NIS gives you a major advantage in being able to monitor all aspects of the GI tract function. One sleep cycle comprises of four stages and last for about 90-120 minutes. Dreams can occur in any of the four stages of sleep but the most vivid and memorable dreams occur in the last stage of sleep (also commonly referred to as REM sleep).

The sleep cycle repeats itself about an average of four to five times per night, but may repeat as many as seven times. Thus, you can see how a person can have several different dreams in one night. Most people, however, only remember dreams that occur closer toward the morning when they are about to get up. When dreams cannot be recalled, it is no indicator that those dreams never
happened. Some people swear on the fact that they simply do not dream when in reality, they just don't remember their dreams.

Phase 1: Eyes move back and forth erratically

Often called REM sleep, this stage occurs at about 90-100 minutes after the onset of sleep. Blood pressure rises and heart rate and respiration speeds up and becomes erratic. Voluntary muscles are paralyzed. This stage may also be referred to as delta sleep and is the most restorative part of sleep. This is also where the majority of your dreaming occurs.

Phase 3 and 4: Also characterised by NREM

These two phases involve periods of deep sleep with phase 4 being more intense than phase 3. Your body temperature drops and muscles relax. You are completely asleep. These phases repeat themselves throughout a night's sleep.

Posted in Insomnia, Neurological, NIS Academy Members
← Does NIS assist in cases of infertility?How does NIS differ to other modalities? →