What issue can influence muscle testing? 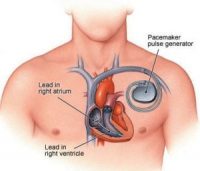 A question that is frequently asked is what issues can influence muscle testing. Apart from the obvious, there is one issue that stands above all others.

When any patient completes a history form, one of the important questions that should not be overlooked is “do you have a pacemaker fitted?” You may well be asking why.

While such a question may only relate to a very small percentage, it is with this small percentage that grabs our attention. Classically the age where pacemakers have more demand is most generally with the male population (73%) that is statistically over the age of 53.

While pacemakers may well be a life saving device, one must be aware that certain precautions are necessary for these people. These are wide ranging to include MRI, right through the spectrum from working with car ignition systems, arc welders, through to keeping a cell phone 6 inches away from the pacemaker.

One of the questions I raised with a cardiologist recently, was can you explain if the wires to the pacemaker are ‘shielded’. My question was trying to account for the obvious effects that the pacemaker can generate with the electromagnetic field and its influence on body systems.

In my experience if the body is not able to adapt to its environment, we will have symptomatic issues that can be both subtle and serious. When you are testing for a patient that has not adapted to changes produced by a pacemaker, then your testing will be regarded as diagnostically inept.

When recording heart rate testing with pacemakers fitted, there will be variable differences occurring by the second, especially when the pacemaker leads are not shielded. Recently, while testing for variances in a patient’s heart rate, findings over a period of 2 to 5 seconds were ranging from 84 to 66 bpm.

Pacemakers interrogate the heart. The interrogation function is essential to allow the device to monitor the controlled parameters for the upper and lower ranges of heart function. The interesting aspect of this case was that the heart was failing to adapt, creating changes where energy failed with exertion requirements, and was influencing sleeping patterns. The body must adapt to these fluctuating frequencies, or one simply lives with the consequences. The approach that is needful is to allow the brain to account for the electrical activity by actually holding a contact in the electrical field over the heart itself. This will cause signal disruption with muscle testing and it is this indicator that will become the primary ‘anchor’ to establish which body ‘platforms’ is implicated.

Our Master’s Seminar protocols are systematically proven to be able to test for these elusive variables, allowing the brain to adjust to the EMF. The outcome with this case reduced the heartbeat to stabilise between 68 to 71 bpm.

Posted in From the desk of Dr Phillips, NIS Academy Members
← How does NIS differ to other modalities?“Doctor, Did you say I have a subluxation?” →